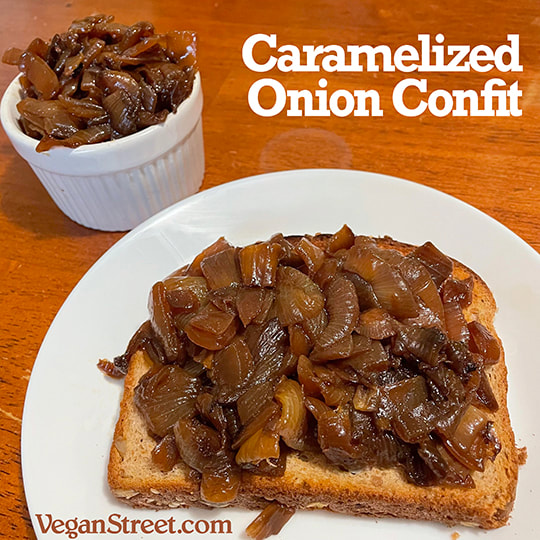 Back when I first went vegan in the 1990s, there was a bakery a few blocks from where I worked and they had a caramelized onion flatbread that was vegan by default. I was broke most of the time but about once a week, I would treat myself to lunch out and it was for one of those pizzas, which was on a thin, cracker-like crust but it was allll about the caramelized onions, which tasted like candy. To my great dismay, I was one of the only people ordering this masterpiece so it was taken off the menu within a year but what a glorious year it was. While I was sad to see it leave the menu, it prompted me to learn how to make it on my own so I have been making caramelized onions ever since.

A confit is a food cooked over a long period of time at a low temperature, a preparation method that makes things very tender. Traditionally cooked with much more oil or fat, my technique will create tender, savory results. No, tamari is not a traditional component of this French cooking method but I think it adds some tasty umami. These sweet onions will taste great on toast or pizza.

Heat the olive oil for one minute in a heavy-bottomed, large pan, ideally a cast iron skillet.

Put the temperature to medium-low. From one to ten, with one being the lowest flame, I had my burner set to four. Place the sliced onions in the pan, turn to coat, and allow to cook for seven minutes, stirring occasionally.

Add the tamari and the salt. Stir through. Reduce the temperature to low – now I set mine to three of ten – and continue cooking, stirring every few minutes to prevent burning and ensure even cooking.

When it’s ready, it will be uniformly browned - though not burnt! - thick and jammy. For me, this was 105 minutes. Store in an airtight container in the refrigerator.