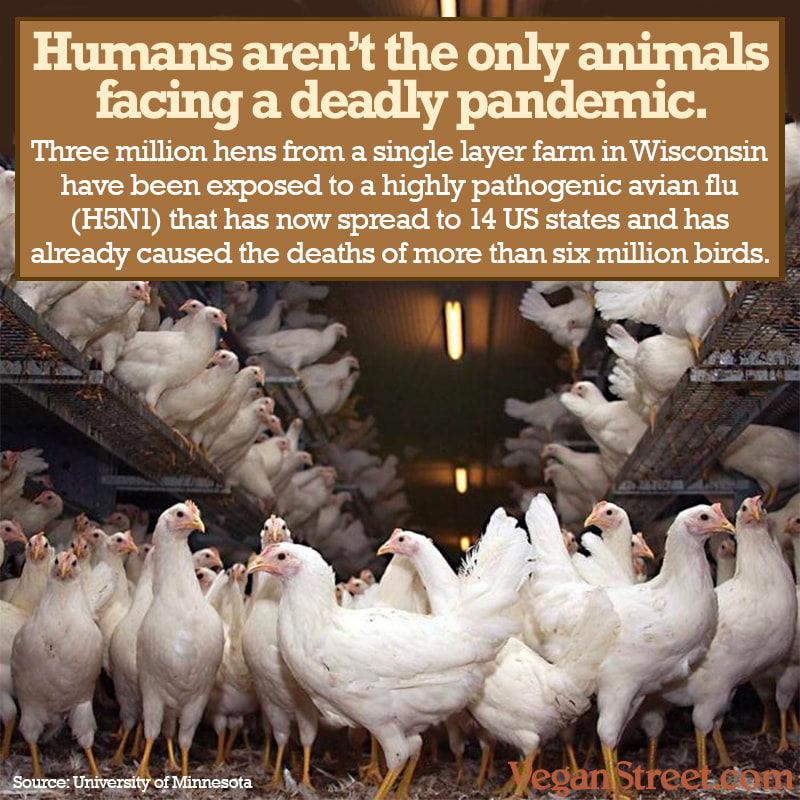 These birds were slated to die after brief, suffering-filled lives soon as it is but consider a couple of things as avian flu sweeps through this country:

• Three million birds were killed at ONE facility. Does it seem like a decent standard of living for sensitive, territorial birds with needs for roosting, perching, dust-bathing, not to mention spreading their wings, is possible in these conditions? Six million infected birds in the US so far have been slaughtered.

• While so far, the risk of transmission to humans is considered low, crossover infection does happen and it can be very deadly when it does. Who knows if it could become this next pandemic? According to Dr. Carl Fichtenbaum, professor of clinical medicine at the University of Cincinnati College of Medicine, “The H5N1 strain has been known to infect humans and cause a more severe form of bird influenza.” According to Dr. Nima Majlesi, director of medical toxicology at Staten Island University Hospital, H5N1 preparedness efforts are underway. “As per the CDC, the [H5N1] vaccine is being stockpiled for pandemic preparedness by the United States government. The vaccine could be used if an H5N1 virus begins transmitting quickly and efficiently from person to person."

• This is also affecting the lives of the birds at sanctuaries. Please consider donating to a farmed animal sanctuary or two to help them during this stressful time of expensive care.

Our source for this meme is the University of Minnesota