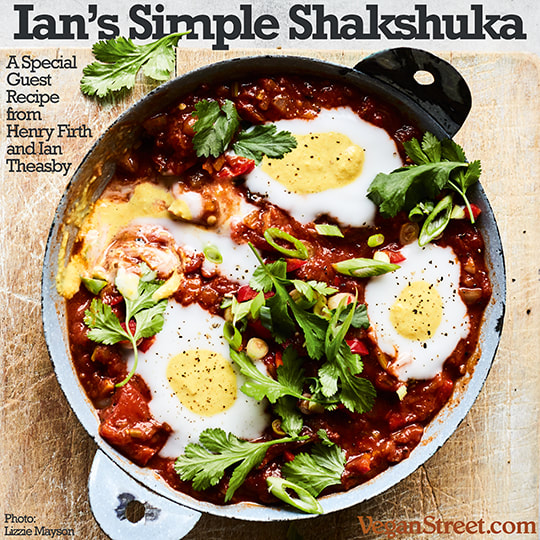 We've put  this in the  brunch chapter as it's a great  start to the day, but  shakshuka  makes a wonderful meal at any time. Served with toasted pitta for dunking, this silky red pepper stew feels really warming and generous. And we're chuffed with these vegan eggs; they look awesome and the flavour is fantastic. Super fun and perfect for lnstagram.

For the 'egg yolks'

For the 'egg whites'

Blacken the peppers
Light your largest gas ring or preheat your grill to high. Put the red and yellow peppers directly on the flame or under the grill for 10-15 minutes, turning them every  5 minutes, until blackened  on all sides. Set aside in a bowl to cool and steam with a plate over the top.

Cook the vegetables
Place the frying pan over a medium heat and pour in the olive oil. Peel and finely chop the onion and add it to the pan. Halve the chilli, dice one half and finely slice the other. Peel and grate the garlic cloves. Add the diced chilli and garlic to the  pan and stir, cooking for 5 minutes. Finely chop the coriander stems and add them to the pan, reserving the leaves. Add the oregano and the spices.
Stir and cook for another 5 minutes. Add the tomato puree and sugar and stir for 5-10 minutes, until the mixture is getting darker and sticky.
Add the vinegar to the pan and let it  bubble away and evaporate. Add the tinned tomatoes, bay leaves and cinnamon and a good splash of water and leave to simmer for 8-10 minutes, until thickened and combined. Lower the heat and keep warm until needed.

Peel the peppers
Rub the burned skin from the cooled peppers with your fingers. Seed and roughly chop the peppers. Add the red  pepper to the shakshuka. Put the yellow pepper in the blender.

Make the 'egg yolk'
Add the plant-based mayo and tahini to the blender with the yellow pepper• Squeeze in the juice of the lemon and season with salt.

Blend to a paste.
​
Make the 'egg white'
Put the yoghurt in a bowl. Squeeze  in  the  juice of the lemon and season with salt. Mix to combine.

Finish the shakshuka
Remove the bay and cinnamon sticks from the pan. Taste the shakshuka and adjust the seasoning if necessary. If it looks dry, add a splash of water and stir it in. Make sure it's nice and warm. Press the back of a spoon into the mixture to make 4 wells. Spoon a tablespoon of the 'egg white' into each well. Use a teaspoon to add a spoonful of the 'egg yolk' into the centre of each white.

Serve
Grill or toast the pittas. Scatter the reserved coriander leaves over the shakshuka. Finely slice the spring onion and scatter it over along with the sliced red chilli. Serve the pittas alongside for dipping.


Excerpted from BOSH! on a Budget by Henry Firth and Ian Theasby. Reprinted with permission of HarperCollins, 2022.