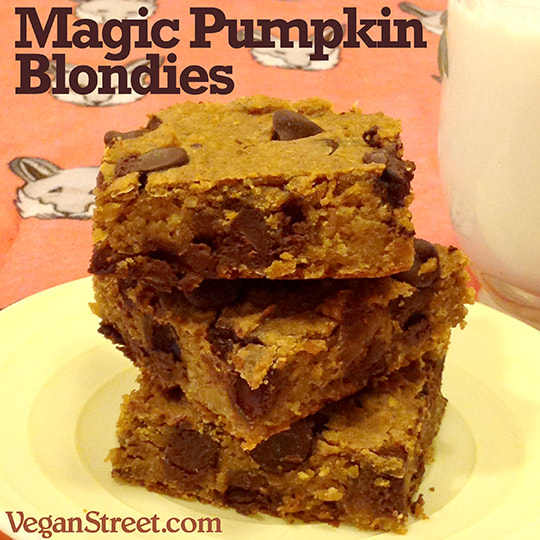 Why magic? Because they are about as nutritious as a goody can be while still being a bonafide treat. If I can give these blondies to two tweens and they think they are The Best Treats EVAH, you’d better believe these are good. Don’t be scared about the beans, trust me, these blondies are decadent, moist, perfect and, above all, magic.

This is a variation of my earlier High-Protein Blondies, mostly adapted with the addition of pumpkin, which makes things rich and warmly seasonal, and that most magic of newly discovered vegan innovations, the fab aquafaba, which adds an undeniable and altogether mysterious oomph to our treats and savories. If pumpkin isn’t your jam – or you’re just damn sick of it – sweet potato purée would be an excellent 1:1 replacement, lending the same sweetness and silky texture. Bring these Magic Pumpkin Blondies to your office, bake them for the kids, whip some up for a Halloween potluck or enjoy as an afternoon pick-me-up: no matter what occasion, these are a great little treat without any regret. Just don’t tell anyone that they are made with magic – that’s our little secret.

Whiz the oats in your food processor for a minute, until finely ground. Add the rest of the ingredients except the chocolate chips. Process for two-to-three minutes, until smooth. You will likely need to stop and scrape down the sides to get all the batter included. Put it in a bowl and let it cool for about five minutes because sometimes the processing warms the batter up and this will pre-melt the chocolate chips, which won’t affect the taste but it won’t look as pretty. After cool, add the 2/3 cup chocolate chips, reserving 1 tablespoon. Mix together with a spoon.

Spoon batter into prepared pan, spreading with a back of your spoon until flat. Push the remaining chocolate chips into the top. Bake for 25 minutes, turn 180 degrees, and then bake for 25 more minutes. Let cool in the pan for 20 minutes and then cut into squares.