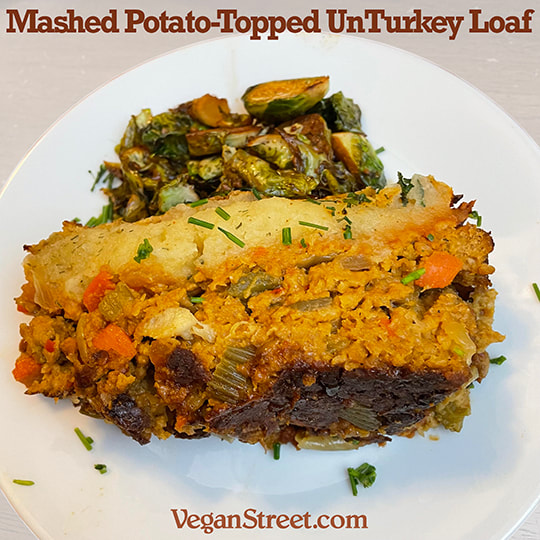 
My mom was not someone who loved cooking. Cooking is not for all of us, no shame in that. One thing my mom did make fairly regularly, though, was a mashed potato-topped meatloaf. Even when I ate animals, meatloaf was never really all that thrilling but my mom’s, probably because it was topped with mashed potatoes, was an exception. (I tried to see if mashed potato meatloaf was a quirk of the ‘70s, a quirk of my mom’s, or a genuine thing other households did but it was unclear.) Anyway, it’s getting to the holiday season and I am missing my mom, of course, so I thought I would try to recreate her old recipe using my Free the Turkeys Meatloaf as the basis and it worked great. While there are a few steps, it is so easy to make and so rewarding: Full of flavor, complexity and rib-sticking heartiness. You will need access to a  Trader Joe’s to make this recipe, but if you don’t and you’re comfortable with a bit of improvisation, you could make a version of this with the same amount of crumbled vegan burger meat. (Not frozen patties, the soft or shapeable vegan hamburgers, like Beyond.)

Enjoy! I still haven’t gotten to the point where I have leftovers but one day I will make two loaves at once and will eat the leftovers sliced in a sandwich, I swear I will!

First: Bake the Free the Turkeys Meatloaf as described in the original recipe for 30 minutes at 350 degrees.

While the loaf is baking, make the mashed potatoes. Use any vegan recipe you like or this one:

Mashed Potatoes
Six cups (this was four large for me) Yukon gold potatoes, peeled and chopped
2 tablespoons vegan butter, like Miyoko’s
Salt, pepper and other seasonings (I used dill and cayenne) to taste
Smoked paprika to sprinkle over the top
2 tablespoons minced chives (for sprinkling)

Start a large pot of water to boiling. Add the potatoes and boil for 16 minutes or until tender.

Drain and, while hot, place in a large bowl with vegan butter and seasonings. Mash until everything is incorporated. Stir with a big spoon vigorously to make it smooth.

Baste the loaf as described in the original recipe after you have baked it for 30 minutes. After spreading this on top of the loaf, scoop mashed potatoes over the top and press it down firmly with the back of a large spoon. It will be a lot but it should all fit. Sprinkle paprika and any additional salt and pepper over the top.

Bake for one hour. Sprinkle with chives for the last five minutes of baking or just after removing from the oven. Allow to sit in the pan for ten minutes, then carefully lift using the parchment onto a platter. Slice and serve warm.