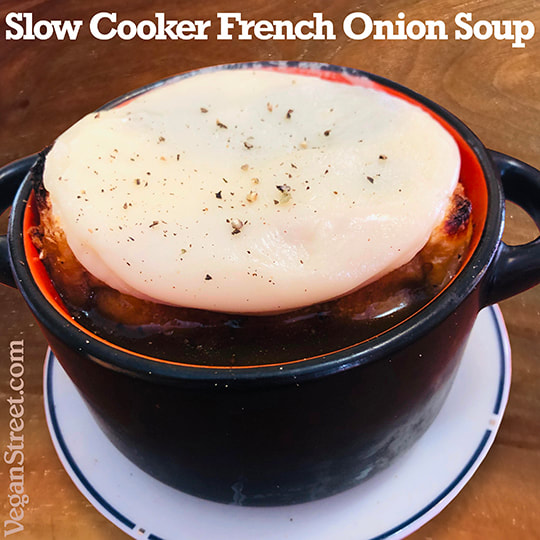 When I was growing up, there was a restaurant near our house that went through many iterations with new owners but when I was a teenager, it was restaurant called Great Godfrey Daniels, all dark wood and stained glass light fixtures, a real pseudo-1920s-meets-TGI Fridays vibe with a logo of a W.C. Fields-type character. In other words, it was perfect for the 1980s and it felt like the height of sophisticated dining.

It was one of the first places I met my friends at without my parents and I just felt so adult. I was already a vegetarian at this point, but I didn’t really understand how soup and broth worked, so I would get the French Onion Soup there for a time, until I was sneeringly informed by a friend that I was eating sooooo many dead animals in the broth. Well, that killed French Onion Soup for me, but for a brief time, it was the epitome of elegance and maturity.

French Onion Soup remains one of those eternal pleasures to me: full of flavors I didn’t grow up with and a slight decadence. It turns out that a slow cooker is perfect for making French Onion Soup, especially as you’re nervously awaiting election results, because it will fill your home with great aromas and you will be rewarded with caramelized, meltingly tender onions, a fragrant broth, gooey cheese and bread. Is that not perfection? Although it takes two days to cook, it’s not like you’re standing in the kitchen: it really is easy. And as we know, good things come to those who wait. I recommend doing the first step overnight, and the next morning, putting in the rest of the ingredients so you will have perfect soup for dinner the next night.


Place the butter, onions, tamari and thyme in a large slow cooker, then program to cook on low for ten hours. After five hours, stir, then re-cover and cook for another five hours.

After cooking for ten hours, add the rest of the ingredients and cook on low for eight hours.


​Start your broiler, and place soup cups on a cookie sheet. Fill the cups ⅔ with soup, then place toasted bread and your favorite vegan cheese (slices or shreds) over the top. Broil until the cheese melts. (This will be quick! Keep an eye on things.)
​Serve, savor and enjoy. Better days are ahead.