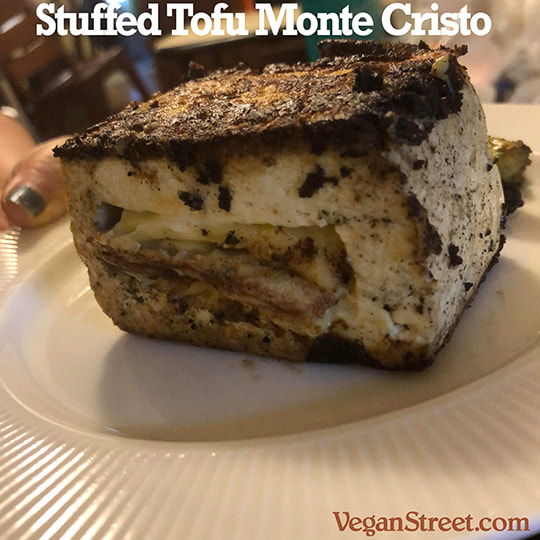 Stuffed Tofu Monte Cristo
​
My son is a budding chef - or at least a home cook, who knows? - and he had the idea for splitting a section of tofu and stuffing it with vegan crumbles last week. (The quarantine will make you do strange things.) Anyway, it was delicious and enjoyable, but the whole thing made me think of Monte Cristo sandwiches. Pretty much the antithesis of vegan, Monte Cristos are sandwiches stuffed with mustard, mayo, cheese and meat slices (most commonly ham), dipped in a custardy egg mixture and pan-fried until everything is oozy and goozy. In other words, not only not vegan, but pretty much a heart attack waiting to happen. For our version, I wanted to expand on that new tofu trick, replace the ingredients with those of plant origin and enjoy something that will never be mistaken for the original but evokes it deliciously.

This is a super easy main dish to make, though it has a few steps. It is worth everything, though!

Set up an assembly station: mustard, mayo, cheese, vegan meat on one side; in a medium bowl, whisk together the egg with the half-and-half or non-dairy milk, salt and pepper and optional black salt.

Take the tofu that has been cut in half and cut a rectangle in the middle, so it cuts through the ends horizontally but does not cut the sides. Basically, you want a rectangle cut out of the middle. (Um, like I just said.) You want to use a small, sharp knife for this, like what is often called a steak knife. I cut out the rectangles on one side, flipped it, and cut it out on the other side. Then I gently pushed out the rectangle. (I put this in the ‘fridge to use for something else.) 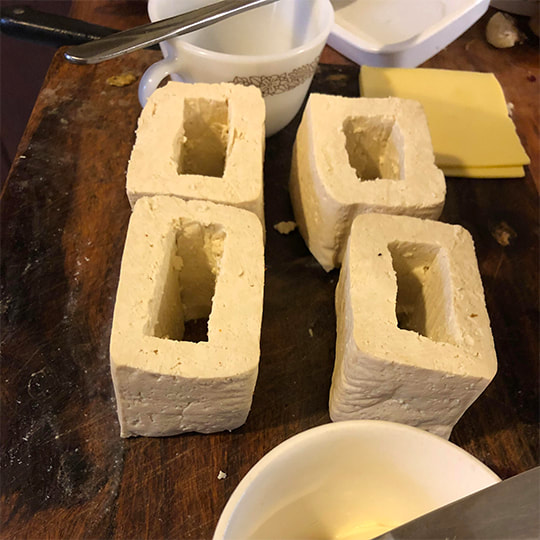 One at a time, take the tofu that has the rectangles cut out, spread mustard on the inside bottom, put two slices of cheese over that, put ¼ the protein slices over that, cover with two more slices of cheese and spread mayo over the inside of the top of the tofu rectangle. Start a large sauté pan over medium heat and spread a tablespoon of oil or vegan butter in the pan. 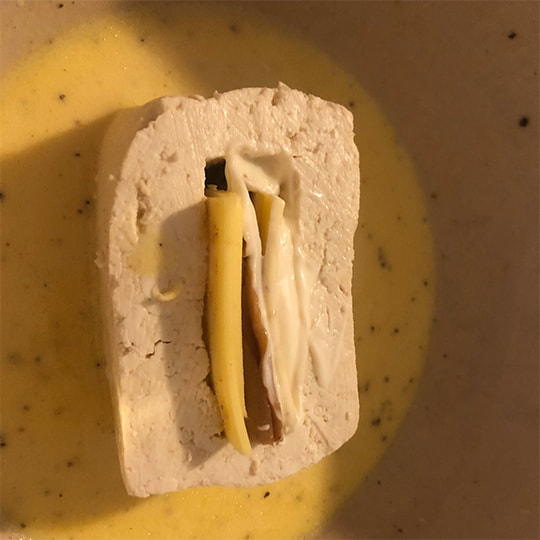