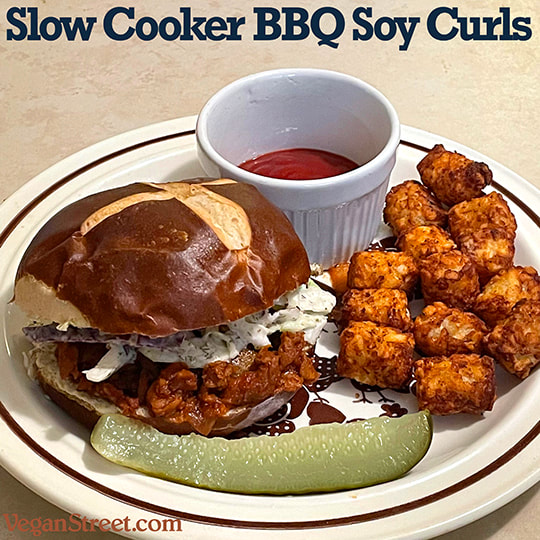 I’ve been craving BBQ and Soy Curls lately so I thought, why not combine them? This BBQ is tender, succulent and full of flavor. Chef’s kiss, if I do say so myself.

I think it’s a lost opportunity that we typically think of the slow cooker for winter because it’s actually perfect for warmer months as it won’t heat up your kitchen. To me, slow cooking adds a depth of flavor you won’t get from the stovetop but especially not an Instant Pot, which is great for other functions. It’s also terrifically convenient if you don’t need it fast: Just plan ahead a little and you’re golden! You can convert this to an oven recipe, which is what I would recommend over another method; I have not tried it this way myself but you can try baking in a lined and covered pan at 375 degrees for an hour or so, stirring every 20 minutes or so.

This recipe for BBQ is the best of all worlds as far as I’m concerned: it’s a little sweet, tangy, spicy and smoky. If you like a sweeter sauce, just add more maple syrup, and if you like a more tangy sauce, you can add more vinegar. You get it. You can also modify it to use your favorite BBQ sauce or a store-bought one. You will need about three cups. Last but not least, a little shout out to super-talented vegan goddess Julie Hasson is necessary for her great tutorial in preparing shredded Soy Curls, which I modified a little but ended up with curls that were firmer and less water-saturated than usual.

It’s perfectly flavorful and juicy served warm on a toasted bun with vegan coleslaw and a pickle.

Heat the olive oil in a large slow cooker for a minute. Add the diced onion, stir, and cook on high for 30 minutes. Alternatively, you can sauté on the stovetop until the onions are softened.

Put the Soy Curls in a large bowl and cover with boiling water; stir and rehydrate all the pieces. Allow to sit for ten minutes, stirring occasionally. All the water should be absorbed and the curls should be softened. Place in a food processor - you may have to do this in stages - and pulse 10 - 12 times to get more shredded pieces. Don’t do it too much or it will disintegrate!

Combine the BBQ sauce ingredients in a medium bowl. Pour over the softened Soy Curls and stir through. Allow this to marinate while the onions are cooking.

Place in the slow cooker with the onions, stir through, and cook on LOW for six hours. You can stir through once an hour or so to keep it from sticking.