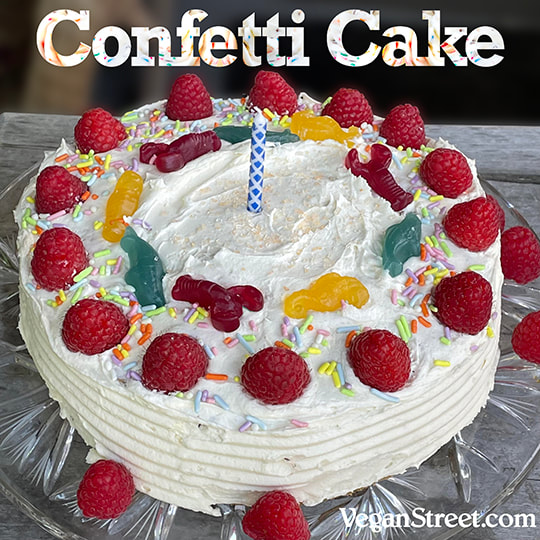 I will let you in on a little secret: I have never had Funfetti cake, the Pillsbury cake mix that was so popular in the 1990s. A basic vanilla cake with colorful sprinkles baked in it for a confetti-like effect, it somehow missed me like a loud party ship in the night. This year when thinking of what kind of cake to make for my son for his birthday, for some reason, the word “Funfetti” kept nagging at me. How could I resist?

Pillsbury owns the trademark for the word, so let me introduce you to my confetti cake! (I didn’t make up this word, either, but apparently it’s not trademarked.) It’s a rich, decadent, soft, perfectly textured cake that will have you wondering how on earth it’s gluten-free. It is also super easy to mix and make. Please note that if you use sprinkles colored with plant dyes, it will be less vivid and bright than a Funfetti-esque cake but it will taste just as good.

Preheat your oven to 350 degrees. Line two 8-inch or 9-inch round baking pans with parchment paper or lightly spritz with oil.

In a medium bowl, whisk together the coconut milk, oil, JUST egg, vanilla until all is combined.

In a large bowl, combine the flour, almond flour, sugar, baking powder, baking soda and salt. Stir to combine. Add the liquid contents into the dry bowl and stir to integrate until smooth. Portion out the batter equally into the prepared baking pans and bake for 31 minutes, testing for doneness using a toothpick inserted into the center of a cake pan. If it comes out clean and the sides start to pull away, it’s ready.

Allow to cool for at least one hour or overnight before frosting. Release from the pans.

Place the butter in the bowl of a stand mixer and start it on low using the paddle attachment. Add the powdered sugar ½ cup at a time at the low speed, beating for 30 seconds or so between each addition. Add the vanilla extract and milk, scraping the sides of the bowl as needed. Increase the speed once everything is added and keep beating until the buttercream is smooth and thick. If it’s too thick, add a very small amount more of non-dairy milk until you reach the desired consistency. If it’s too thin, slowly add in more powdered sugar. (You can also do all this with a hand mixer.)

When ready to frost the cake...

Take one cup of the buttercream in a small bowl and mix with the jam, stirring vigorously to fully combine.

Place one cake on the surface you’re using for frosting or serving. Plop the jam-flavored buttercream in the middle and spread out in a circle to about an inch of the edge. Place the second cake on top, top facing up, gently pressing down. Spread the vanilla buttercream over the top and sides of the cake. Decorate as you like, chill and serve. 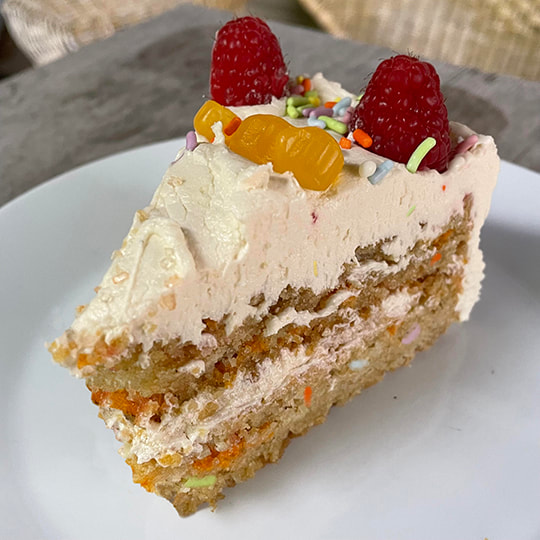