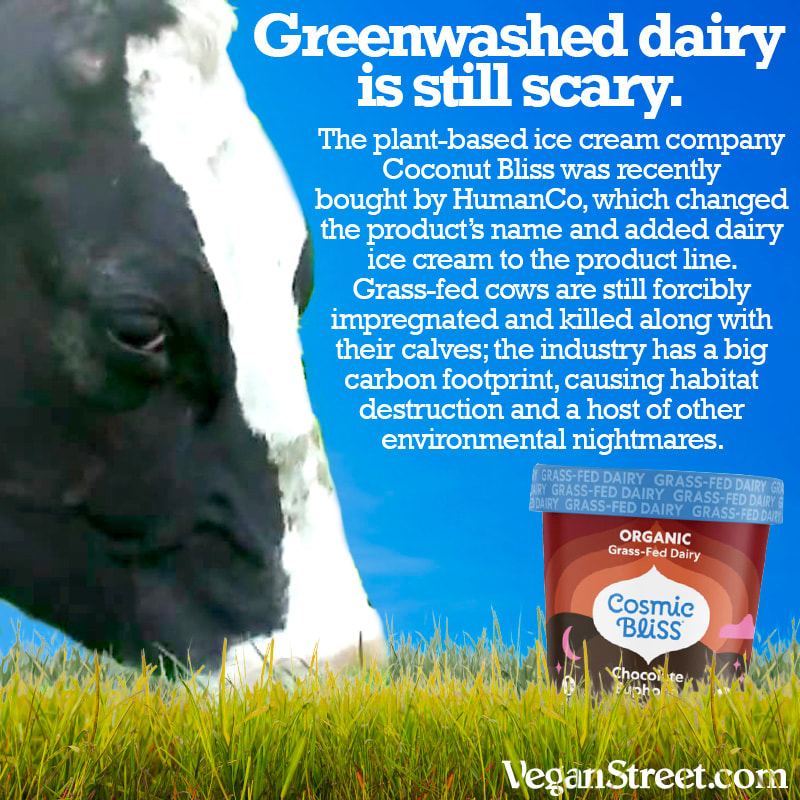 In an effort to confuse consumers by attaching dairy products to a popular plant-based ice cream line, HumanCo bought Coconut Bliss, partially changed its name to Cosmic Bliss while keeping its basic logo and style structure intact, and has added cows' milk to a formerly reliable and respected vegan product line.

Beyond the obvious cruelty and death to millions innocent mother cows and their offspring, the dairy industry poses some of the greatest threats to the environment on any industry on the planet. Dairy and beef products produce planet-choking amounts of methane and CO2 emissions that are rapidly hastening climate change. Grass-fed cattle produce particularly high levels of methane, consume massive amounts of water as well as land and contribute mightily to habitat destruction. Ranchers will destroy any animals that pose a threat to their herd or compete with the herd for resources,  including wolves, coyotes, mountain lions, deer, beavers and other animals. Cattle grazing is a major cause of desertification and water shortages in the Western US, as well as the leading force causing the annihilation of the Amazon rainforest.

In addition to greenwashing, it is also humane-washing: The cows are forcibly impregnated and their calves are taken from them shortly after birth, the males killed right away or forced into the brutal veal industry,  and the females resigned to the same pregnancy-birth-lactation cycles until they are less productive, and slaughtered at around age four. They are all killed to become cheap beef, whether they are "grass-fed" or conventionally raised. They are all slaughtered the same way.

By co-opting the Coconut Bliss name, the dairy industry is desperately trying to portray their products as "just as good" as plant-based products. Don't let them fool you.