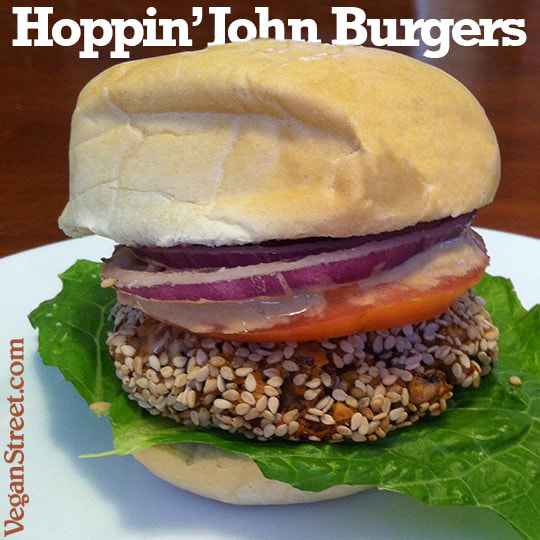 I usually eat some form of black-eyed peas on January 1, a customary food in the U.S. believed to help usher in prosperity to those who eat them on the first day of the new year. I don’t know if they will bring prosperity but I still love black-eyed peas: they cook quickly for a legume (no soaking required), and they are full of fiber. One year, I decided to turn these into burgers.  The result was a burger that was soft and flavorful on the inside, crispy on the outside, thanks to the sesame seeds (actually, some cultures consider sesame seeds good luck, too).  They take a little time but they are easy to make and truly delicious. Serve hot from the oven or warm up in a skillet coated with a little oil. Load up with your favorite fixings - especially lucky greens! - and dig in.

This recipe was originally published in our Fun, Festive & Fabulous Vegan Holidays for Everyone cookbook.

While the black-eyed peas are cooking, combine the quinoa with two cups of water in a small pot and bring to a boil, then simmer, covered, over medium-low heat until the water is absorbed and the quinoa is tender, about 15 minutes.
In a large skillet, heat the vegetable stock over medium-high heat for a minute, then add the onions. Cook for 4 - 5 minutes, until the onion is beginning to soften, then add the garlic, spices, crushed tomatoes, tamari and salt and pepper. Simmer for 20 minutes over medium heat, occasionally stirring.

Preheat oven to 350 degrees. Cover a baking sheet with parchment paper or lightly brush with oil. Spread the sesame seeds on a large plate.

Place half of the cooked black-eyed peas in a food processor and purée until smooth. In a large bowl, combined the puréed black-eyed peas, remaining beans, quinoa, tomato-onion mixture, garbanzo bean flour, scallions, chives and any additional seasoning. Mix together with a large spoon. The mixture should be thick. Scoop up 1/3 cup, roll into a ball, then roll each one in the sesame seeds, coating it completely. Place on the prepared baking sheet, press to lightly flatten, and continue until the sheet is full.
​
Bake for 20 minutes, gently flip, then bake for 17 more minutes. Serve warm with all your fixings. Enjoy the new year!