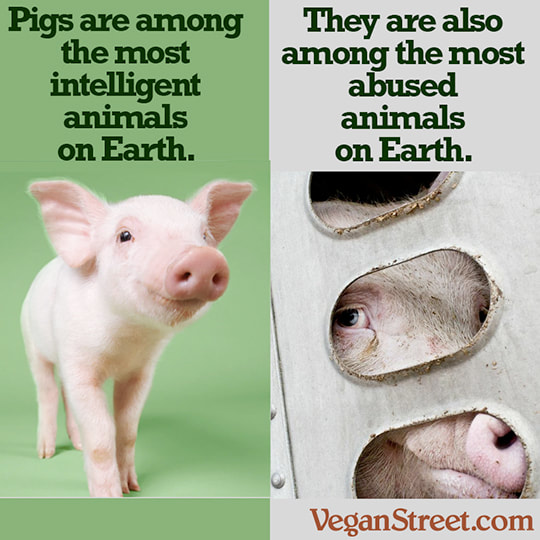 Intelligence isn't an indication of deservingness to live, but pigs are considered very smart, able to problem-solve with great long-term memories and complex social natures.

Here are just some of the brutalities inflicted on pigs so we can eat them:

• They are separated from their mothers shortly after birth, only able to nurse on the other side of farrowing crates.

• Routine mutilations include: Tail docking, side teeth clipping and ear notching, all performed crudely and quickly without anesthesia or follow-up care.

• Though research shows that in natural conditions pigs are highly active, spending 75 per cent of their day rooting, foraging and exploring, pigs in the "food" industry are condemned to uncomfortable, frustrating indoor lives.

• Breeding mother pigs are almost always kept indoors, forcibly impregnated from the time they are six to eight months old; they are kept in barren, metal and concrete cages called farrowing crates shortly after delivering their piglets. Piglets are usually taken away at three to four weeks so that the process of impregnation can start again.

• After four to seven months, pigs not used for breeding purposes are packed in trucks destined for slaughterhouses, forced to endure overcrowding, long journeys, rough handling and extremes of temperature.

• Seeing the sky and feeling the air from the slats on the truck may be their first time experiencing either before they are slaughtered.